Solar VS Nuclear Power: Battle for the Best Energy Source

Solar vs nuclear energy is one of the most contentious debates among proponents of renewable energy.

These energy sources are regarded as clean and devoid of carbon emissions, and their infrastructure can be constructed in large enough quantities to provide power to a vast area.

The United States has more than doubled its solar power capacity this year.

It is estimated that at least 5.7 gigawatts of additional solar capacity will be added to the grid by 2023, with 58 gigawatts now installed over roughly 2 million solar installations.

That said, the future of nuclear power in the United States is also uncertain.

Nuclear reactors in the United States haven’t been built since the 1990s, and the two most recent projects have been plagued by delays and cost excess. 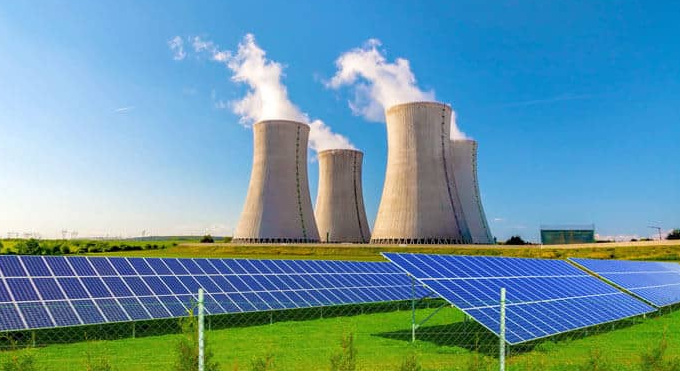 In comparison to nuclear energy, solar energy costs are much less expensive.

It costs an average of US$ 40 (around Php 2,000) to generate one megawatt-hour (MWh) of power from a solar farm, according to a 2020 report on the subject. On the other hand, nuclear power plants have an LCOE of US$ 155 (roughly Php 7,700) to produce the same amount of energy.

As compared to solar, nuclear’s upfront and operating costs are astronomical.

According to the IEA, in terms of cost and capacity, nuclear power is falling behind renewables due to its reactors becoming less cost-effective over time and slower to reverse carbon emissions.

“The latest IEA data on the state of the global energy system show that renewable energy, notably wind and solar PV, are poised to account for more than half of new capacity additions by 2030,” said the IEA in a statement.

“Nuclear power’s share of new capacity will fall from 19 percent today to just under 5 percent.” “Nuclear power is the least flexible source of electricity generation, requiring decades to build and decades more to decommission,” the IEA said. “Renewables have the potential to provide baseload power immediately, while also offering more flexibility than other sources.”

By 2030, the IEA estimates that renewables will generate some 16,000 terawatt-hours of electricity – or about 40 per cent of total global demand.

The IEA sees three scenarios for the global energy mix by 2030:

Scenario 1: The status quo, in which coal, natural gas, and nuclear all grow in proportion to demand.

Scenario 2: An “all of the above” approach, with renewables increasing from today’s levels of around 10 per cent to approximately 20 per cent of global demand.

Scenario 3: A more aggressive scenario in which renewables increase from today’s level to reach nearly 50 per cent of global demand.

The IEA said this is a crucial moment for the energy sector because the transition to a low-carbon energy system needs to be managed with great care.

It must not be done too fast, leading to supply shortages and higher prices.

And it must not be done at too slow a pace, which would allow carbon emissions to rise and contribute to global warming.

“There is indeed an urgent need to stabilize the climate, but nuclear power is slow.” said Mycle Schneider, the report’s lead author.

“There is no operational or technical need that it cannot meet better, cheaper, and faster than low-carbon competitors.”

The World Nuclear Association (WNA), which represents the nuclear industry, had predicted that reactor construction would take between 5 and 8.5 years on average between 2009 and the report’s release.

“To protect the climate, we must reduce carbon emissions as much as possible while doing so inexpensively and quickly,” Schneider said.

When faced with the decision of deciding to construct a new nuclear power plant or build large-scale solar farms, consider the following hypothetical scenario:

It is up to the developer of a planned nuclear power plant to decide whether to build the project before construction begins or after the plant has been completed.

They can decide whether or not to build one 2,430 MW nuclear reactor in 10 years or as many 250 MW solar farms as possible in that same time frame.

If the goal is to increase the amount of carbon-free electricity in the grid, they should select to build utility-scale solar, as it is a great way to store energy, but it does not generate power when it is needed.

The cost of a solar farm can take over 30 years to recoup if it is used only to store electricity for use when it is needed most.

This will allow utilities to pay less to generate power, reducing the energy cost that they buy from coal and natural gas plants.

14 utility-scale solar farms could be built in the same decade it takes to make one nuclear power plant if one 250 MW solar farm is built every nine months.

There will be a 46 per cent increase in carbon-free generation capacity per decade if these 14 utility-scale solar projects are completed.

Utility-scale solar generates additional nine years of electricity while the nuclear facility is under construction, whereas a nuclear power plant comes online all at once.

Going Cheaper and Faster With Solar

Even when accounting for capacity built and energy produced from a nuclear facility,  a new nuclear power plant costs a fraction of what this one does, and a solar project is significantly less expensive.

The most recent data from the United States shows that solar power is now less expensive to build and install than nuclear power in the United States. Energy Information Administration (EIA), solar electricity generated in the U.S. in 2017 was more expensive than new nuclear plants on average.

A new report released Bloomberg New Energy Finance (BNEF) also shows that building and installing solar has dropped so low that it is now cheaper than building new nuclear reactors.

Solar’s cost advantage over nuclear is most pronounced in the early stages of development; it is still less expensive and faster to build large-scale solar farms than atomic reactors.

Utility-scale solar easily outranks nuclear as the leading source of carbon-free power in the United States as governments and utilities plan for the next century of power generation.

As governments and utilities across the U.S. plan for the next century of power generation, utility-scale solar easily bests nuclear as the leading source of carbon-free power.

A net of 24 GW of nuclear and coal capacity will be retired in the next three years in the United States as the country’s renewable energy sector expands by 45 GW.

A decade after adding nearly 40 new reactors to its grid, China remains the world’s most aggressive nuclear builder, but its atomic output remains a third lower than its wind generation.

There have been no new nuclear plant construction projects in China since 2016, even though several are currently under construction.

Despite an increase in global nuclear capacity of 3.4% in the last year to 370 gigawatts, a new historic high, renewable energy capacity has proliferated, keeping atomic power’s share of global gross power generation at just over 10%.

More than three times as many new reactors would be needed in the decade leading up to 2030 to maintain the status quo, according to the World Nuclear Information Service (WNISR).

In May, the International Energy Agency (IEA) issued a dire warning stating that advanced economies could lose up to 25% of their nuclear capacity by 2025, putting their climate change goals at risk.