How to Protect Solar Panels from Hail Storm 101: A Step-By-Step Guide

Hail storms are one of the biggest challenges for people who live in the countryside.

When they happen, they cause severe damage to your solar panel installations, which means if you’re going to live off-grid, you really need to know all the pro tips out there on how to protect solar panels from hail storms when they come. 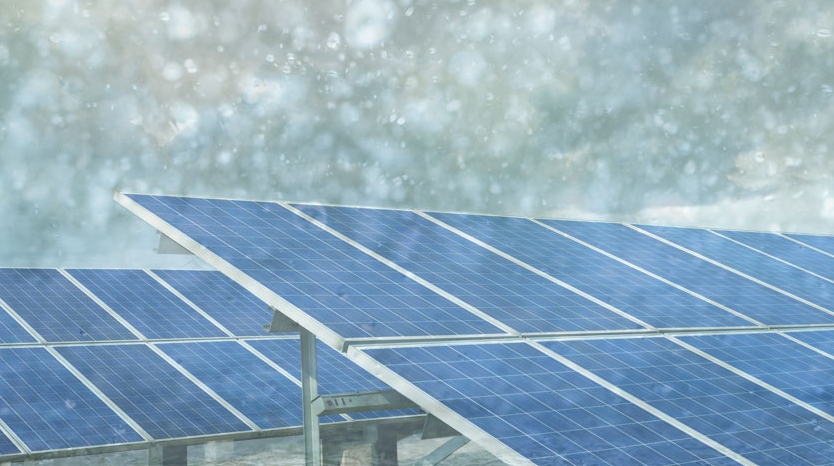 The first time I saw a hailstorm was in 1991 in Southern Ontario. The sky turned black, and the wind came so fast and intense that it seemed as if the world had stopped spinning.

It was a terrifying experience.

I saw hundreds of trees lying on the ground the next day, completely broken and splintered. Many farmers lost their farms that year.

You could easily spend thousands of dollars to fix your solar panels, as hailstones have the potential to do significant damage to solar panels, which are essentially like sitting ducks in a hailstorm.

So can hail damage solar panels? The answer is YES.

Though it’s true that solar panels are covered with a glass covering to protect the solar cell and wiring within the panel, and the majority of panels can survive the impact of hailstones up to one inch in diameter; manufacturers still must submit their panels to several tests to certify their capacity to resist hits such as hailstones due to the high-quality requirements.

However, if you live in a state such as Colorado, Nebraska, or Wyoming, where severe hailstorms are common, you may need to take additional measures while purchasing and installing solar panels on your roof.

Clean energy from solar panels is essential for living a sustainable lifestyle, but installing solar panels may be prohibitively costly.

It’s critical to understand how to maintain your solar panels in excellent shape and operate to get the most value out of your investment in solar.

You may save money by repairing rather than replacing your panels if you have insurance to cover the costs of any damage.

Essential maintenance should be performed regularly, and proactive measures to avoid damage should ensure that your investment does not become an expensive maintenance nightmare.

Continue reading to find out all you need to know about shielding your solar panels against hail damage.

This is the most critical part on how to protect solar panels from hail storms.

Without proper support, they are likely to be damaged by wind and other elements. If your home has been built on a slab, you can install your solar panels directly onto the slab.

If your home is on a concrete foundation, you will need to install a platform to hold the solar panels in place. Some people choose to build their own platform for their solar panels.

The International Electrotechnical Commission (IEC) is in charge of developing standards for the impact test of solar-power systems.

It specifies that the panels must survive the impact of a 25mm ice ball travelling at a speed of 23m/sec striking the panels.

When a panel does not break, its energy production does not decrease by more than 5%, and no water leaks from the panel, the test is considered successful.

In places such as Australia, the maximum size of a hailstone is 35mm, which is larger than the rest of the world.

Hailstones may be significantly bigger than 25mm in diameter.

As a result, even approved panels are susceptible to failure during a violent hailstorm.

On the other hand, some solar panel producers willingly subject their panels to more rigorous testing.

Choosing these higher-quality solar panels will be a better choice if you live in an area where hailstorms are frequented by humans.

➡️ Get The Right Panels

In contrast to structures and vehicles constructed of durable materials such as concrete, steel, and wood, solar panels are made of materials that seem to be far frailer.

It is necessary to choose the panel based on your area’s typical size of hail.

While most solar panel producers stop at the minimum required test, some go the additional mile to produce higher-quality panels that will withstand more rigorous testing.

The explanation for this is straightforward;

The majority of solar panels are composed of photovoltaic cells, typically constructed of silicon and put on a frame that is then coated with a layer of toughened glass (source).

Solar panels made of crystalline silicon are the most prevalent solar panels seen in commercial applications.

A more recent discovery is that solar cells consisting of amorphous silicon are used in thin-film solar panels. Instead of using glass, they are typically coated with a layer of plastic, making them much lighter and more flexible.

Thin-film panels may then be shaped to fit the contour of a car’s roof, for example, making them an excellent alternative for outdoor explorers who want to be able to take their vehicle wherever.

Thin-film solar panels are also less expensive than crystalline silicon panels, although they are less efficient.

Undoubtedly, it is nerve-wracking to realize that you are about to install a hard, hefty, fragile collection of silicon and glass to your roof and that you are at the whim of the elements.

This is one of the reasons why so many people are concerned about how to prevent their brand new energy systems from being damaged or destroyed. But don’t get too worked up just yet: the risk may not be as severe as you believe.

In contrast to structures and vehicles constructed of durable materials such as concrete, steel, and wood, solar panels are made of materials that seem to be far frailer.

The majority of solar panels are composed of photovoltaic cells, typically constructed of silicon and put on a frame that is then coated with a layer of toughened glass (source).

Solar panels made of crystalline silicon are the most prevalent solar panels seen in commercial applications.

A few more dollars spent today might help you save hundreds, if not thousands, of dollars in the future.

It may be worthwhile to invest in a protective cover for your solar panel, which may be used to cover the glass surface of the panel when severe weather is forecast.

One of the most effective methods to protect your solar panels from hail damage is to use a solar panel protection cover or shield.

It’s best defined as a rugged cover that goes over your solar panel and keeps it safe from harm caused by hail or heavy rain when required.

If you cannot locate a cover specially made for your panels, a tarpaulin, a few thick blankets, or a piece of plywood can provide enough coverage.

Precautions should be taken to avoid scratching the surface of the panels or pounding a heavy item against them, as this may result in precisely the kind of damage you are attempting to prevent.

Some RV owners construct their own permanent solar panel coverings out of transparent materials such as plexiglass, which they then install on their vehicles.

In some instances, however, a cover may be necessary to restrict the sunlight hitting the panel and hence its energy production, particularly if the plexiglass gets damaged or broken.

You should also think about getting an adjustable mounting frame, which will enable you to tilt the panels into a vertical position when hail is forecast.

Unless you have gale-force winds blowing the hail sideways, less surface area is available for the storm to settle on when the panels are inclined vertically.

➡️ Add a Layer of Methacrylate to Your Panels for Extra Protection

The majority of solar panels, with the exception of thin-film plastic surface solar panels, are fragile since they are composed of glass.

When doing so, however, special care must be taken to ensure that the solar cells are not damaged since broken solar cells may harm the system’s performance.

Remember not to cover any parts where electricity is transmitted through (such as metal regions) if you choose to spray it since this can cause your panels to short circuit.

It’s also vital to pay attention to how much methacrylate you use since using too little won’t be effective, and using too much may prevent sunlight from reflecting off the panel itself.

Many people believe that adding methacrylate coating to your solar panels is more cost-efficient than utilizing solar panel protection covers since it does not need the purchase of any additional items and simply requires you to invest the time necessary to spray this layer onto your panels.

According to the manufacturer, you can get this sort of protective coating for less than 50 cents per square foot, which means that covering all of your panels would only cost you approximately $50 in total.

The most significant part about how this works is that it will have no effect on how your panels function, so you won’t have to worry about any harmful effects on performance or anything else of the kind.

⛈️ Is There A Need for Protective Wire Gauges for Protecting Your Panels Against Hail Storms?

You can add extra protection to your panels by installing a wire gauge on top of them.

Because of its effectiveness, it is a commonly employed safety measure in the United States.

This has a high clearance percentage since it is the most cost-effective and efficient method of shielding solar panels from hail storms.

When converting to solar energy, there is a significant financial outlay since the house’s electrical system must be upgraded to be compatible with solar energy sources.

Because of the long-term advantages of solar energy, this is an investment that is well worth making.

It is very inexpensive and environmentally beneficial.

It is important not to let your investment go to waste, and there are numerous methods for protecting your solar panels.

When they hit their PV modules, they spray little ice balls at them from 70 miles per hour. The end effect was spectacular; the panels were saved from destruction. If your panels can endure that, they will be able to weather a hailstorm.

Solar panels are the future. They’re cheap and clean, and they generate renewable energy. But if you live in an area where hail storms occur regularly, there’s a risk that your panels could be damaged by hail.

But after a few minutes of research online, you’ll find all kinds of solutions that cost anywhere between $20 and $150. None of them is foolproof. Some will work fine for a few years, and others won’t last a month.

You don’t need to live with that risk. You can protect your panels from hail damage and save yourself thousands of dollars.

The advice listed above is efficient in safeguarding your solar panels. However, some of them may not be feasible for you to apply due to the nature of your business. Then, depending on your area, budget, and present circumstances, choose the most suitable technique and follow the directions provided.

You may save money on unnecessary expenditures such as panel replacement and disruptions in your energy output if you take precautions to protect your solar panels.